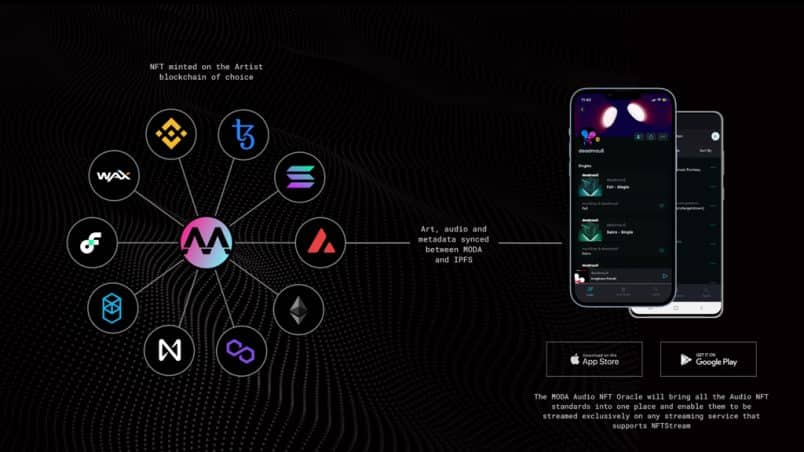 The Future Of Sound

It’s not surprising that the music industry is still a dark place for most artists that are trying to make a living from creating music. These days music artists still have to deal with revenue-hogging middle men. A streaming service like Spotify for example, works with a business model where the platform operator takes a cut for each stream. Also, the discovery feature of Spotify tends to put lesser-known artists at a disadvantage in contrast to musicians that already made it in the industry. This leads to a distribution funnel that is only benefiting the musicians that already have a big name in the industry. In the current system, the lesser-known artists are being completely left behind (MODA DAO, 2021).

On a brighter note: change is coming. Or better said: change is already here.

The music industry has been closely aware of the evolution of blockchain technology since 2015. This topic has been discussed at multiple conferences in the past few years. There have also occurred various projects based on blockchain technology within the music industry, some being unsuccessful and disappearing and some making progress in an interesting direction. But in 2021, blockchain has advanced in a more rapid way, resulting in the Web3 space (Westenberg, 2021).The time has come for the music industry to converge and embrace this paradigm shift from centralized to decentralized systems that is currently happening.

Earlier in 2021, there has been a rise in popularity of non-fungible tokens (NFTs) in mainstream media. What NFTs do is unlock value by making scarcity in the digital world real and assettized. Furthermore, they allow musicians, designers and artists to gain control over their work, making them the masters of distribution (Westenberg, 2021). NFTs and the underlying technology are enabling more democracy to the music industry, and more power to musicians, by allowing them to avoid the traditional middlemen, including streaming services like Spotify (Eliezer, 2021).

By reintroducing scarcity in the digital world with the use of NFTs, it is possible to make music feel unique again. Digital scarcity is necessary to create a unique customer experience and make it possible for fans to form a longer-lasting and more genuine connection with their favorite artist (Westenberg, 2021).

Presently, there is nothing really unique about the music on Spotify. Songs for example do not come in limited editions and music enthusiasts are not able to collect rare album releases. In addition, it is not possible for diehard fans to get their hands on the first (or third or tenth) release of their favorite track. This way, the music gets a higher intrinsic value that also displays the love a fan has for a certain artist (Westenberg, 2021).

This system including music NFTs will definitely benefit the artist, because rare and limited editions have more value. It also makes it possible for the fan to grow together with the musician. For example, if a fan owns the first release of a track that a few years later blows up, the fan also experiences this rise of fame. The fan could also choose to sell this #1 release NFT, since it has increased in value. The original artist also gets a cut from this sale. NFTs provide a recurring revenue; the developer can code these tokens so that the original creator receives from 2.5% to 10% of every time this NFT is sold again (Kila, 2021).

NFT technology is also highly appealing to musicians due to the financial aspects. The tokens have been selling at extremely high prices. Well-known artists like DJ Steve Aoki and musician Grimes have sold NFTs worth millions of dollars. But also lesser-known artists, like Vérité and Zack Fox, have made tens of thousands of dollars by selling their NFTs. The artist Young and Sick had only 27K followers when he sold his NFT for $865,000 (Kila, 2021).

When artists start selling their music as NFTs, they are giving away a part of the ownership of the song. This way, artists can treat their songs as equity investments and this gives those buying the music NFTs also an opportunity to get a return on their investment, while the artists also gain money.

Lastly, the music industry in Web3 will consist of NFT sales, blockchain streaming, fractional ownership and social tokens. Web3 is still in its very early stages; it will take a long time to unfold. It is very similar to the 90’s, when the internet (Web1) started getting popular among the mainstream. Now is the time to take action and learn how to contribute to this new open-source technology, allowing the future to be in our hands.

Cherissa Harpe is a young professional currently studying Creative Business at Inholland University of Applied Science. She has a passion for marketing and graphic design. Catch her on LinkedIn.

Kila, J. (2021). NFTs are a game changer for independent artists and musicians. COINTELEGRAPH. Retrieved from https://cointelegraph.com/news/nfts-are-a-game-changer-for-independent-artists-and-musicians